A brief history of our Organ

From 1940, according to my own personal memories. 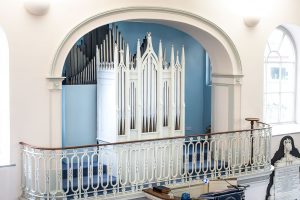 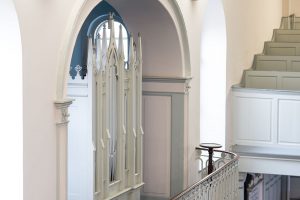 My earliest realisation that we had a ‘special’ church organ was one Christmas time.  As a very young child (around the mid-forties) I was sent up to the organ loft behind the pulpit, along with my friend Anne, and was told by my Father that we were to grasp hold of the big wooden lever at the side of the old organ and pump it up and down as hard as we could every time the organist gave us a wave. This was exciting as we had often been up there before, exploring and having great fun trying to balance the apples along the ornate edges of the railings at Harvest time. This time, it was ‘proper’ work and we felt very important. The organist had to climb down into a sort of well below the array of pipes, to where the keyboard and seat were virtually hidden from the entire congregation, but we could view everything from our more elevated station…. even down into the pews, where some people could even be seen eating sweeties or having a wee doze between hymns! We only had to perform this task at special services such as Children’s Day and Christmas. The pitch of the organ was so high that only children’s voices could match its tone. On other days, the services were accompanied by a single manual harmonium of uncertain age, from which emitted more wind than musical notes, because of the rickety pedals.

Following the deprivation of building materials as a result of the Second World War, by the 1950’s the church was badly in need of serious repairs, including a completely new roof.  During assessing the cost and extent of the repairs, the Rev. John McCleery contacted Lord Dunleath of Ballywalter, a world-renowned antique organ collector and restorer, to check out the state of our organ.  I remember the excitement and dilemma with which he left us after that visit. He dated the organ as being built in 1745.  Then he announced that it was almost priceless because of its antiquity and what’s more, he wanted to buy it for his own unique collection.   The price he offered would have paid for all the necessary repairs as well as a complete refurbishment of the whole building and probably, several decades of worry free upkeep as well. Many hours of anguish and debate followed among the elders and the Minister but in the end, it was decided that Dunmurry should not be parted from its own piece of valuable history. Thus, many more years of the building fund prevailed. “Churches only thrive when there is a flourishing building fund on the go,” was the cry of the time! Meantime, the congregation had been given a more modern harmonium from the Moira Church, if I remember correctly.  So, our Jacobean treasure became a fine piece of history, never to be pumped up again. It remained alone but proud in the unused organ loft. No one even went up there with the harvest apples.

Our elegant new harmonium was situated in the middle of the choir stalls, which has a long bench seat and carved wooden railings. They were added to the church building in Victorian times and considered by many at the time, as an unnecessary frivolity. The organist, a charming and talented woman, sat in the middle of the bench seat, the sopranos sat on either side of her, the altos sat in the seat below the pulpit while the bass and tenors, sat on the side seat.  This arrangement became a bit of a problem when my sister was the soprano sitting to the right of the instrument. During the playing of the collection music, she would gently lift the organist’s wrist high off the keyboard, with one finger, leaving that poor woman to only use her left hand. It has to be noted that the lady’s dexterity and skill at instantly transposing the melody to her left hand for the remainder of the piece, was amazing to behold, particularly as she was trying to scold the offender at the same time. Perhaps the Victorians were right about that frivolity after all.

We graduated to an electronic organ next and this gave out a tremendous noise with its two manuals, and even on occasions, gave out the Home Service radio programmes whenever the wires got a bit crossed. However, it did the job for many years.

Some years after the Rev. Wm. McMillan came to Dunmurry, the church had to be redecorated and refurbished. and a firm of painters took on the task. When they went into the Organ loft, it was found that there had been a leak in the roof above it. The rain and snow had dripped unheard and unseen for many years, directly into the historic, delicately hand-crafted Jacobean pipes of our treasured instrument. It was found that the problem had been caused by the roof actually shifting position when the church was badly damaged in mid-seventies, by two bombs that demolished the nearby railway signal cabin and its replacement. Unfortunately, the bomb assessors did not spot this effect at the time and when it was discovered, it was too late to claim compensation for yet more repairs. Alas, when the workmen were clearing the area for their paining work there was no one around to stop them from enthusiastically removing all the damp and damaged organ pipes from the inside and disposing of them in the skip. They were pleased that the front of the organ looked sound and had been repainted beautifully. It was only when a   musician that had been visiting the Manse, recognised the remnants of the hacked and sodden pipes in the skip, that we realised what had happened. The damage was irreparable, Lord Dunleath was no longer around to save it and to this day, only the shell of the organ case remains to remind us of the terrible loss as a result of being so close to the railway and our unwitting neglect.

Shortly after that Charles Smetherhurst came to the village. He had retired to Dunmurry, following a brilliant career in as an organ builder. He asked the Rev. McMillan to perform a wedding for him and his bride and being naturally interested, heard the tragic tale of our defunct organ. By way of gratitude for the marriage arrangements, Charlie built specifically for our church, a single manual, fully equipped, proper pipe organ that was pitched perfectly for the size and acoustics of the building. An amazingly generous gift indeed. The tone was so soothing after years of the rather harsh electronic machine and seemed just right for our small church.

After around twenty years or so, the organist of the time, felt that the single manual instrument was no longer suitable for the church and the committee was persuaded to purchase a new, state of the art, electronic, two manual instrument. It was purchased from First Church, Rosemary Street in Belfast. They had been using it when their pipe organ was being restored. It was certainly a big improvement from our last electronic one and the expense of it was lessened by the very generous contribution from the organist and his wife, towards the cost of installation. it can perform every musical function in the book from bells and chimes to automatic transposition of keys, but fortunately, it does not allow the radio programmes to get through. It is quite a joy to see the organists’ hands and feet producing some magnificent music that matches every emotion and celebration.

Sadly, for me anyway, the Smetherhurst organ is no longer in use but it is safely stored away, intact, in the Church vestry, hopefully awaiting reinstatement at some future date. I check it regularly myself to be sure it does not suffer any fateful indignity!